Do you know what a bindle is?  I didn’t until a few weeks ago.

As it turns out, a bindle is the sack or “bundle” that a hobo, in the day, would carry on a stick that he would have found along the way.  The bindle was no more than about a square yard of material, usually cotton, tied on it’s four corners around the end of the stick.  Inside the bindle would be all of the necessities of light travel.

Ned’s bindle is made of basswood and has ample creases and folds along with the four cornered knot.  The biggest challenge was painting it…I painted it four times until I got something that made me happy.  I think that the checked fabric really lends itself to all of the folds and accentuates them by being stretched in the right places on the fabric and disappearing behind the folds at other places.  I added a bit of “dirt” with some browns and yellows and then topped it off with a clear urethane.

I like to think that Ned’s bindle contains a harmonica that he plays well, a good whittling jack-knife, some apple pie that a kind farmer’s wife left out for him and a few treats for his little dog, Hobo.

I’m still working on the walking stick and plan to give it a paint job shortly. 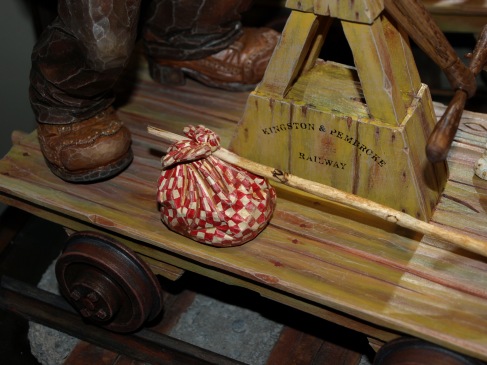