Remember the Monty Python skit with the guys with the knotted handkerchiefs on their heads?  Ha!  When I was a kid we had a very nice older man as a neighbour who also used to always knot a handkerchief and wear it on his head when he was cutting the grass.

Well, our little Beach Basset is following suit.  The handkerchief with the stress wrinkles at the corners where the knots are located was simply carved into the head of the Basset.  I cut the edges irregularly to make it look like the material was disappearing beneath itself all around the head.

The knots were made separately from small pieces of cherry.  The cherry was used as it is harder than the basswood and will be able to withstand an inadvertent “knock” without breaking off.  I just fashioned a knot with the end piece hanging out and a long round section on the other end that could be epoxied in drilled holes at the knot locations of the handkerchief.  You can see this in the one photo that shows two knots back to back that were later separated in the middle and glued in place. 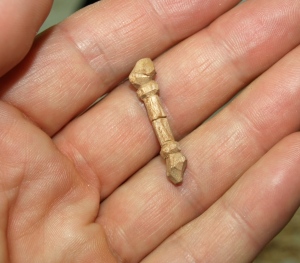 2 thoughts on “Memories of Monty Python”