I’m just back from the Hamilton Carving Show with some good news!  The little Country Hound placed 1st in Open Caricatures, 2nd in Open Class and 3rd Best of Show.  Not bad for a banjo-playing-hound!

I met Emily for the day on Saturday and we had another great time together…taking in the carving and wood show, touring through the aircraft museum there and seeing all of the air-worthy restored aircraft and finishing off the day at our favourite Indian restaurant.  What a great daughter.

Many, many fine carvings at the show and it was nice to chat with the other carvers that I’ve met over the last few years.  Dave Wilson had an outstanding caricature carving in Open Class.  This was a caricature of a real-life performer and Dave even managed to get the actual performer to sign his piece.  Very nice and an interesting story behind the carving.

John Mills had a nice relief carving that really caught my eye.  You’d think that this was cut separately and laid on the background, but, in fact, this was all carved from one solid piece of wood.

George Cook also showed off a really nice Cardinal that he did for the show.  The branch and leaves were copper wire, automotive body filler and copper shim-stock.  It looked to me that as much attention went into the branch and leaves as did the songbird.  Once again, real nice.

Some really interesting carvings and I wish that I had caught all of the names associated with the carvings.  I want to also mention that a real highlight of this particular show is the time that the judges spend chatting with you individually and then later in seminar style to provide feedback on each of the carvings.  I got a chance to spend some time with Neil Cox, Mike Shepherd and George Cook in this regard.  A great opportunity to learn.  Well done to the organizers of this event! 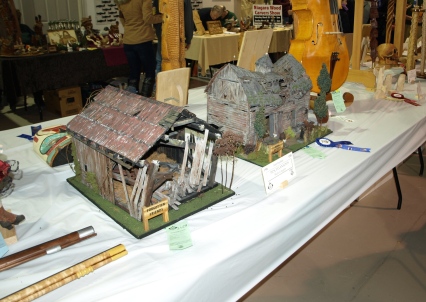