This past weekend, we all enjoyed the Magic in Wood competition and show in Pickering, Ontario.  We battled Toronto traffic to drop Paul off at Emily’s house for a couple of day’s visit and then Peggy and I returned to Pickering for the two day show.  I set up a few of my carvings along with some information on the Ontario Woodcarvers Association website (ontariowoodcarvers.ca), Peggy volunteered in the kitchen and Emily and Paul visited on the Sunday of the show before we headed back to Kingston.

This was the show that I had the chance to lead a small group in the carving of the little Basset-in-a-Bag idea that you saw earlier.  I think that it went pretty well and I’m looking forward to seeing a photo of the finished carvings from the participants.  Next year, I think I’ll prepare just a single aspect of caricature carving as the two hour period we were given wasn’t nearly enough to finish even the roughed-out version that I  had provided.  Plus, the number of rough-outs that I could complete limited the class size and I know that there were several others that would have joined the class had I enough rough-outs.

Here are a few photos of some of the carvings that were displayed at the show.  Just click on the photo to make it bigger.  If you can make it to this show next year, you won’t be disappointed. 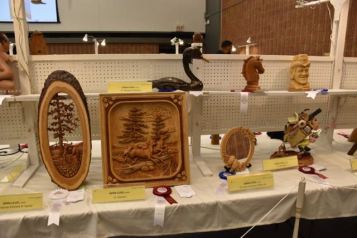 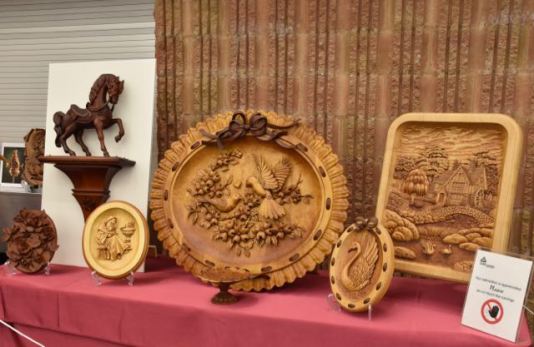 4 thoughts on “Magic in Wood Show”