A Bit of Heat

I’m afraid that I’m old enough to remember twisting the valve on the hot water radiator in order to get some heat into my apartment.  Although I could have carved the radiator from memory, I referred to a few pictures before I started.

The radiator started as a rectangular block of basswood.   I scored the block with about 3/16″ deep saw cuts all around just using a handsaw and later I rounded the block on the top and bottom.  This created the various segments to the radiator.

Following that, I rounded the front and back of each individual segment leaving a high point in the centre of each.  With some scrap basswood, I made a couple of legs with claw style feet and glued them in place.  Also with scrap basswood, I carved some pipes with a valve on one of the pipes.  The valve handle is just a couple of washers glued to a brass nail.

I wanted to make the radiator look like it was made from brass that had tarnished over time, so I mixed a couple of colours… Copper Penny and Burnt Umber…and covered everything except the pipes.  I then took the Copper Penny colour and dry brushed over the whole thing so the the high points would look more brass like and less tarnished.  The pipes were just painted a beige colour with a little rusty brown around the joints.

I had completed a little valence for the window some time ago and painted it up and added some brass nails in the “upholstered” diamond panels.  The two pieces look pretty good together. 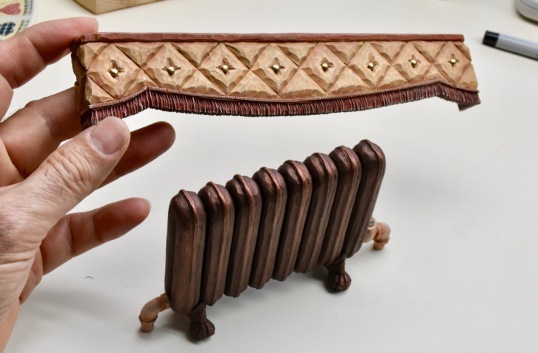