This little roadster is in need of five new wheels…four on the road and one on the trunk.

I started out by cutting a thin slab of basswood…about 3/8″ thick to mimic the skinny tires that 1920’s roadsters would have had.  Then, with a hole saw I cut out the blank for each of the five wheels.  I actually cut out a smaller blank of thinner material ( happened to be cherry ) and glued it onto the centre so that I’d end up with a disk hub for the brakes…not that these two characters ever touch the brakes on their joy rides.

I then put these on a small hobby lathe that I have and rounded them out and added a few line for treads and whitewalls on the tires.

The whole thing was followed by the start of the front end of the wheel assembly.  More detail to come, but you can see the drive mechanism and the suspension coming into shape.  It’s also going to have a crank for engine starts, as well! 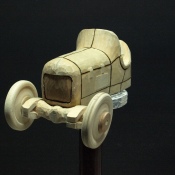