Here’s a clay model of the figure of Mary and child that I’ll eventually use as the 3D model for the relief that I’ll be carving.  I’ve found while doing my last several carvings that a quick clay model is really helpful in the carving process.  The wood carving ends up being a bit different, of course, but the clay really gives you a much better sense of how to carve than does the 2D sketch.  The relief is fairly shallow with the difference from the base to the highest point being a little over 1/2″…but, the effect is pretty nice, I believe. 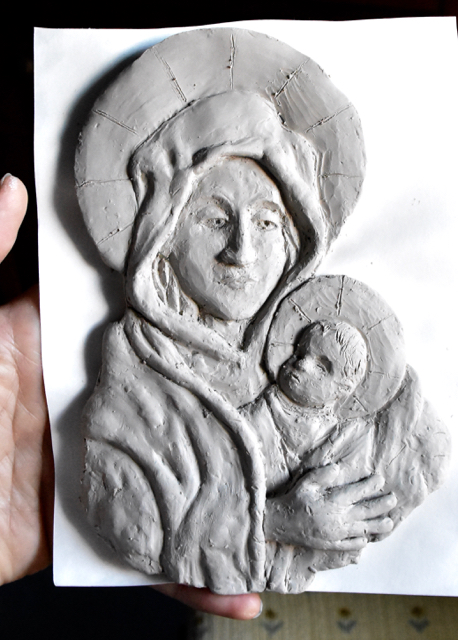 I built up the clay right over top of the drawing that I had produced earlier.  Once that was done, I flattened out about a 1/4″ thick piece of clay and laid the built up clay over top of that.  This gave the clay model a little bit more strength and also allowed me to carve out a bit more depth in a few spots.

As the clay that I use is water based ( not oil-based ), I need to keep it moist so that it doesn’t fully dry, shrink and crack.  I’ve placed the figure in a zip-lock plastic freezer bag with a moist paper towel covering it and will check on it now and again before I use it to begin the carving.

My plan is to model each of the four clay figures that I’ll need before putting too much attention into creation of the box carvings.