Archive for the tag “Religious Figures”

I’ve completed the latest panel for the new chalice box and now all panels are ready for joining.  This was an interesting panel as the figures were a bit smaller due to the fact that I had to include two figures together on the panel.  The folds in their robes and their facial expressions were also fun to carve. 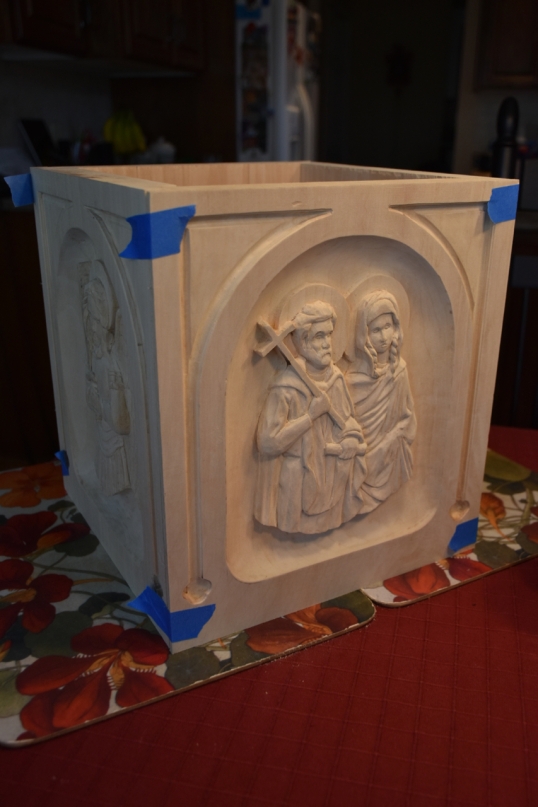 Here’s the start to a new panel and chalice box.  This panel of St. Timothy and St. Maura will replace the St. Mark panel and will accompany the three other panels similar to my original versions of Jesus, Mary and Archangel Michael.

To speed up the roughing-in process of the previous panels that I had carved, I made what I’ll call a 3-axis pantograph.

Do you remember “X and Y” coordinates from high school?  Going back in time isn’t it?  A 2-axis pantograph that follows a horizontal x and y plane is often used with a router for sign making.  It’s basically a stylus and router both mounted on a pivoting arm.  By tracing the stylus along a pattern, and because the router is attached to the same arm,  the router will follow an identical path while cutting into a horizontal wood panel.

Now, for roughing in my 3-dimensional relief carvings, I needed a third, or vertical, axis…”Z.” Now it’s all coming back to you.

The horizontal XY was accomplished with three pieces of plywood stacked one on the other and attached with metal drawer sliders.  The Z axis came about by attaching to this contraption a fourth piece of plywood with an attached router and stylus…and…hinges.  The result was that the drawer sliders allowed the router and stylus to move back and forth and sideways on a horizontal plane ( XY ) and the hinges allowed it to move up and down ( Z ).

It worked great.  With my previous carved panels in place beside a blank piece of wood I was able to transfer a roughed in version of the images pretty quickly to the wood.  From there, it was still a matter of doing all of the detailing…but, it speeded up the process and it was just plain fun for an old time engineer.

I’ve been spending some time putting a finish on the basswood and oak chalice box and have learned a lot from the process.

Basswood doesn’t really stain very nicely, in my opinion.  So, I used a method of finishing the basswood that Fred Zavadil has perfected…and I’ve just started to learn how to do.  The result is pretty nice, however, I’ll do a few things a bit differently next time that I finish basswood in this fashion.

I started by covering the basswood with a urethane finish, starting with a very thinned version of urethane and ending up with a more concentrated urethane.  Although I thought that I had put a lot of urethane on the carving, I could have used more and next time I’ll ensure that the basswood is thoroughly saturated with the urethane before going on to the next step.

And the next step is applying some artists colours right over top of the urethane.  With the urethane hardened on the basswood, the artists paints do not soak into the wood and you can manipulate the colouring to your liking.  What I found with my first attempt is that the urethane hadn’t completely saturated all of the end grain portions of the carving, so the thinned down artists paints had an opportunity to soak to a minor degree into the wood.  This made the process of manipulating the darker artists colours a bit more difficult.

I used a combination of burnt sienna and burnt umber for the colouring and I’m pleased with the way that it turned out.  The colour is quite rich and the box has a bit of an antiqued look to it.

Hope you’ve enjoyed this diversion from caricatures as much as I have.  Just click on the photos to make them bigger. 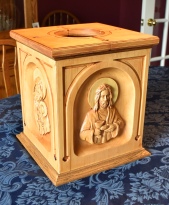 Here’s the glued-up version of the chalice box with the hinges attached on the lid.  I made really good use of the dremel tool and plunge router attachment to add a lot of “embellishment” including a nice corner rounding on each vertical corner that you might not be able to see in these particular photos.

Next step is to apply a finish.  I’ll add a link to the side panel of the site so that you can get to Fred Zavadil’s website easily.  Fred does outstanding work and has experimented with basswood finishes to the point that he has a specific method of producing what I’ll call an antiqued look to his creations.  I’m going to follow his general method this weekend on this chalice box.

The panels of the box are about 1 1/8″ thick and the lid top is 3/4″.  Because the chalice must protrude through the top of the lid to some extent ( probably about 3/4″), I needed to cut a hole for the 5″ diameter chalice top.  I made the hole slightly larger so that there wouldn’t be any interference when the lid was being opened.

I wanted a perfect circle so I made a plexiglas base for the dremel plunge router that would allow me to swing the router around a nail hole in the end of the plexiglas.  Sort of a compass with a router bit on the end.  I cut nearly all the way through the board and then turned it over, found the centre again and set the router compass up to cut through the other side.  This ensured a nice crisp cutting line on both sides of the board without any chipping.

I also used the router to cut a stylized cross into the top of the lid with the little three lobed designs on the end of each branch similar to what I did with each of the panels.  Once I cut out the centre circle, I cut the lid in two on the bandsaw.  After a bit of decorative routing on the edges, here’s what it’s looking like.  Tomorrow, I’ll fit some hinges and then I should be able to start putting a finish on the wood. 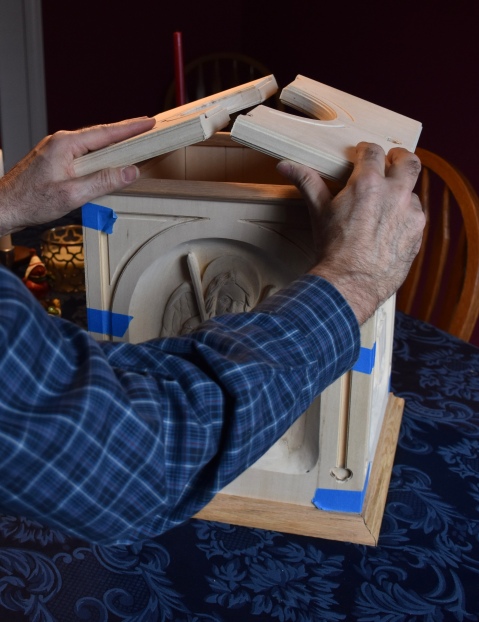 I was in Niagara Falls this past few days helping my Mom with a few things and I dropped by a wood moulding store nearby and picked up a couple of nice pieces of oak trim.

The smaller contoured trim in the foreground of the photo will be fastened to the top of the box with the contoured side facing down and the flat side up.  The idea is that this flat surface will be what the hinged lid of the box will sit upon.  The larger piece in the background will become the base of the box.  I cut the mitred joints on a radial arm saw. 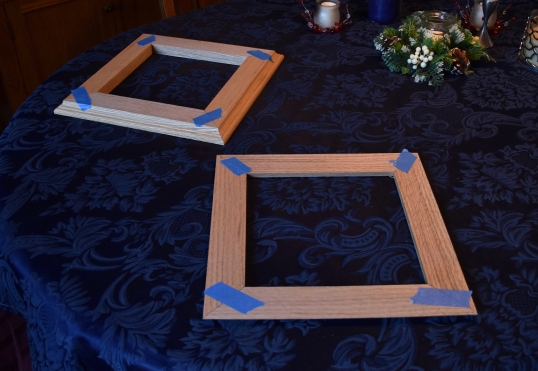 Here’s what it will look like once it’s glued together…minus the tape!

Today, I’ve fitted everything together with a bit more cutting here and there.  The biggest item was routering a recess in the bottom inside of the box to accommodate the bottom panel.  Once that’s in place and everything is glued together, I’m planning to add some oak trim at the top to act as a shoulder for the lid and at the bottom to act as a more decorative base. 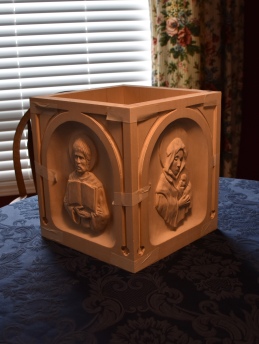 I had originally intended to join the box together using bevel joints…basically, a 45 degree saw cut along the length of the box side with each side glued to the adjoining panel.  I don’t have a table saw but I do have a nice radial arm saw that was given to me by my Dad.

When I cut the basic panels out of the basswood length that I bought, I had set the saw up pretty accurately for a nice square cut.  There’s actually a lot to setting up a radial arm saw and I had it within about 1/64″ accuracy.  When I went to cut a bevel cut, however, it was a different story.  The bevel cut of about a 12″ length and through an inch thick stock just could not be kept accurate ( and I’m honestly still not sure why )…so, I gave up and went to Plan ‘B’.

And Plan ‘B’ worked out so well it will now become Plan ‘A’ for remaining projects!

As you can see from the photos, I created a bit of a more complex rabbet joint using a router.  I just carefully measured out the dimension of the rabbets and used a fence and hand-held router.  I wanted to keep any joint lines that might be slightly visible as thin as possible…that’s why there’s that little 1/8″ ‘cap’ on one of the panel sides.  Next step is to add a top and bottom to the box.

Are carvings really ever completed?  It always seems to me that there’s a little more that I can do.  But, I think with these four panels that I’m pretty much where I want to be.

I used the plunge router base that I bought for my Dremel tool to get those panel lines that you see around the figures.  A little chisel work was required to clean things up a bit, but it was mostly done with the little router and a 1/4″ bit.

Next stop is to put them on the radial arm saw to get the 45 degree bevel cuts that I need on the sides to form the box.  I took a long time in setting up the saw and I think I have it very close to square.  I’ll try a few pieces of scrap material before I start into the panels that I carved.  If you’re wondering why I didn’t do the bevel cuts first…I flirted with that idea as well.  I decided that I’d have a better chance of damaging the corners while carving so decided to do the bevel cuts last and then glue up the box.

With a bit more detailing with the Foredom tool equipped with ruby cutters, and some initial sanding, Saint Mark is looking pretty good.

This afternoon, Paul and I are doing some swimming ( indoors…it’s -10 C outside ) and Mom is making us pizza for supper…so, if I get a bit more carving time in there as well,  all told it’s going to be another banner Saturday!