I just got back from the Niagara Wood Carving Show.  I was really pleased to have won the Peoples’ Choice Award for “Two Minutes for Fighting” and 2nd Best in Show for “A Moving Experience.”

The real news ( beyond the fact that Niagara got about 4″ of snow while I was there…) is that the carvings entered in the show and those on display were exceptional.  Here are a few photos that I took of some of the carvings.  They’ll inspire you to do more carving!

Just click on the image to make it bigger.

Hobo and Ned attended the Niagara Falls Carving Show this past weekend and brought home a 1st Place in Caricatures.  My two bark carvings also did well picking up a 1st and 2nd in that category of carving.

In the next two photos, you can see that the caricatures category was popular at the show and had some creative entries.  In the second photo, the Indian bust was completed by Bill McDougall and was particularly well done, in my opinion.  Bill and I spent some time catching up on news and talking about their show coming up in the Erie, New York area this summer.

The show itself was held at a new venue for the Niagara Carving Club:  Heartland Forest,  which was a beautiful facility and well attended throughout the weekend.  In fact, on Saturday, with the large number of people attending  it was somewhat difficult to get closer to the tables and booths to take in the many carvings.

My Mom, also here in the photo, attended the show with me and a number of relatives from the Niagara region also dropped by to see how Hobo and Ned made out.  It was a nice weekend.

Well, the Niagara Falls Woodcarvers Show was just terrific this past weekend.  Very well organized and attended with loads of friendly people to chat with and to share ideas.  This is an event that you will want to put in your calendar for next year at about this time. 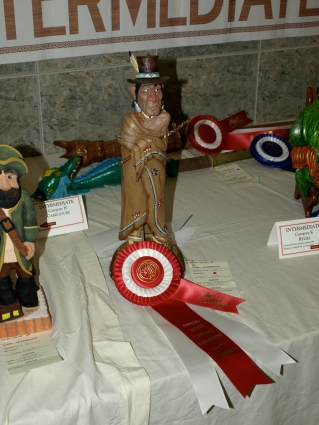 I took along Chief Dan Turtle-Rock and my recently completed Cpl. Duncan Sowerby.

The Chief and I were very happy to see him awarded a First in Intermediates Caricatures.  In talking with one of the judges, they really liked his overall appearance ( that calm and proud demeanour ) and appreciated the little details like the beadwork on his costume and base.

Corporal Duncan Sowerby also received a ribbon for Third Place in Intermediates Caricatures.  Not bad for his first time out on the circuit.