Now that the head is at least roughed in for our little cowboy hound, it’s time to start thinking about a hat.  The hat is made in two pieces along the same lines as described by Lynn Doughty on his website OutWestWoodcarving.  Basically, the side view of the brim was outlined on a piece of basswood with the grain of the wood running from the front to the back of the brim.  After cutting out this profile, an elongated oval was cut ( looking from the top of the hat ) so that I ended up with the cut-out shown in the second photo, below.

Following that, I took a little bit off of the top of the hound’s head to make a flat area to sit the hat upon.  Using the method of applying some pencil lead to the top of the head and slowly chiseling away the impression of the lead that’s left on the hat, I ended up with a depression on the bottom of the hat brim that made a nice tight fit on the head.  This might seem a bit unnecessary to you, but you’ll find that having this depression makes the hat sit nicely on the head in a way that leaves you with the impression that the hat is fully covering the head and not just sitting on top of it.

The crown of the hat was pretty simply made…just a quick cut out of an almost rectangle on the bandsaw and then some knife carving to get the rounded shape from the top view.  I say, rounded, but it actually is round with a bit of a point at the front.  That just seemed to look about right to me.  Then, I just used the same method of applying pencil lead to the brim and let it rub off onto the bottom of the crown so that all of the high points were highlighted by the lead markings.  A few ( actually, quite a few ) swipes with a shallow gouge removed those lead marks and ended up with the crown sitting nicely on the brim.  I should also mention that I added a hat band using a carving knife and a quick pass with a burning tool. 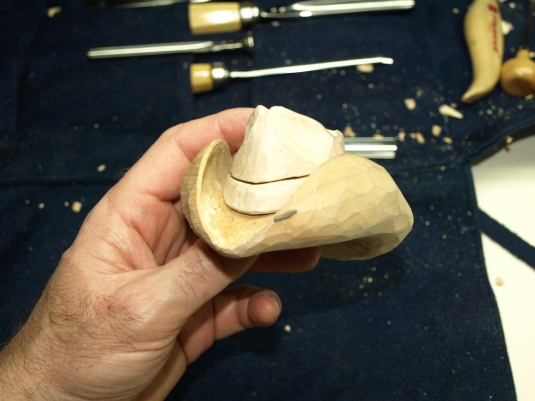 2 thoughts on “The Cowboy Hat”