Archive for the category “Basset in a Box”

Actually, a bit hinged as I wanted to include a couple of handles on the front and back of the basket.

A pretty simple addition, really…just some household copper wire strung through a hardwood carved handle and then bent to fit in some holes that I drilled into the basket. After painting, I’ll glue the copper wire in place.

But I have put a little bit of time into carving. I’ve actually been joining a group of fellows at our local Seniors’ Centre for some carving once a week and have been enjoying that…and managed to finish a bark carving and a Santa figure ( which my Mom now has ). Next week, I’m providing an afternoon seminar on caricature carving at the centre and I’m looking forward to that as well. Hopefully, I’ll get some more people involved in caricature carving.

The Basset in a Basket is coming along nicely. I like to trim down the ears quite a bit so that they’re thin and, with a bit of sanding, take on a velvety appearance. The facial features are coming along nicely as well and I’ll make sure that he has droopy eyes to go along with his howling pout.

A couple of the participants in the “Learn by Doing” session where we created a Basset Hound at the Magic in Wood Show have sent in a photo of their versions of this little guy.

Wes is still pondering on the final finish and whether he’ll add some more decorative painting to the bag before he applies a clear coat.  I like his version with the bulbous nose.

Wendy sent in her completed Basset where she dry-brushed the bag to pick up the high points.  I think that looks really nice.  Wendy’s been busy and she also sent me in another project that she just completed…and just in time for the Ontario weather to change. 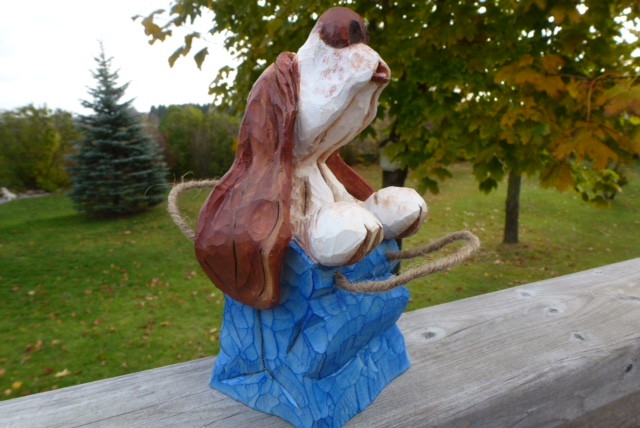 The “Learn by Doing” crowd at the recent Magic in Wood Show asked me if I would provide them with a few close-ups of the little hound-in-the-gift-bag carving that they started at the show.  Here are a few additional photos, below, for this group and any others that might want to try this project.  Of course, you can look back in these posts to find a few more photos of the little dog.

I’ve been asked to lead a carving session at the fall Magic in Wood carving show and competition held in Pickering, Ontario.  This session is part of the “Learning by Doing” program where carvers sign up to take part in one of a variety of two hour carving projects during the show.   For some reason, it was suggested that I take on a Basset Hound carving…

Here’s a few photos of what I’m planning to do.  I’ll finish this carving with some acrylic paint in the next little while such that it depicts the little hound popping out of an opened gift box or moving box.  The painting portion will have to be done by the participants outside of the two hour session.

I first cut out of basswood the pencil drawing that I made.

Then, with a Foredom tool equipped with a very aggressive “Typhoon” bit, I roughed out the general shape of the carving.  My plan is to provide the participants with this “rough-out” to begin their carving.  I thought that this would give people ample time to detail their carving within the two hour session, yet still have the opportunity to do a lot of carving.

Then with smaller gouges and a carving knife, I began drawing out the details of the ears, paws and head.  The grain runs from top to bottom which makes it fairly easy to carve away the excess material.  You can do the carving with just a knife, however, it is much easier to get the sweeping curves of this little sculpture using gouges.

With some more attention to the detail and, again, using gouges and knives, I undercut the ears and around the paws to a greater extent.  I added squinted eyes rather than round eyes as the little dog is howling his glee in meeting his new owner…or, maybe just because he’s finally out of the box!  Of course, the squinted eyes are easier to carve quickly but the individual carver can change that if they like.  I plan to bring some reference photos for people to use so they can add details of their own based on their carving experience.

I’ll add another post in the next few days of the box lid that will be a separate piece propped up against the base of the box.

Running a session like this is a first for me, so if you have some feedback or advice for me I would appreciate hearing about that.  Although the “sign-up” registration for “Learning by Doing” is not on the Ontario Wood Carvers’ website just yet, I’m the webmaster for that site ( ontariowoodcarvers.ca ) and plan to get that up on the site in August.